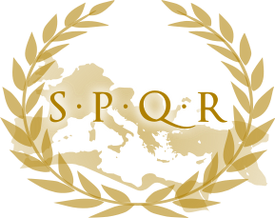 SPQR is an initialism of a Latin phrase, Senātus Populusque Rōmānus ("The Roman Senate and People"; referring to the government of the ancient Roman Republic, and used as an official emblem of the modern-day comune (municipality) of Rome. It appears on coins, at the end of documents made public by inscription in stone or metal, in dedications of monuments and public works, and was emblazoned on the standards of the Roman legions.

The phrase commonly appears in Roman political, legal and historical literature, including the speeches of Cicero and the Ab urbe condita libri ("Books from the Founding of the City") of Titus Livius (Livy).

The title's date of establishment is unknown, but it first appears in inscriptions of the Late Republic, from c. 80 BC onwards. Previously, the official name of the Roman state, as evidenced on coins, was simply ROMA. The abbreviation last appears on coins of Constantine I the Great (ruled AD 312-337), the first Christian Roman Emperor.

The two legal entities mentioned, Senātus and the Populus Rōmānus, are sovereign when combined. However, where populus is sovereign alone, Senātus is not. Under the Roman Monarchy neither entity was sovereign. The phrase, therefore, can be dated to no earlier than the foundation of the Republic.

This signature continued in use under the Roman Empire. The emperors were considered the representatives of the people even though the senātūs consulta, or decrees of the Senate, were made at the pleasure of the emperor.

Populus Rōmānus in Roman literature is a phrase meaning the government of the People. When the Romans named governments of other countries they used populus in the singular or plural, such as populī Prīscōrum Latīnōrum, "the governments of the Old Latins". Rōmānus is the established adjective used to distinguish the Romans, as in cīvis Rōmānus, "Roman citizen". The locative, Rōmae, "at Rome", was never used for that purpose.

The Roman people appear very often in law and history in such phrases as dignitās, maiestās, auctoritās, lībertās populī Rōmānī, the "dignity, majesty, authority, freedom of the Roman people". They were a populus līber, "a free people". There was an exercitus, imperium, iudicia, honorēs, consulēs, voluntās of this same populus: "the army, rule, judgments, offices, consuls and will of the Roman people". They appear in early Latin as Popolus and Poplus, so the habit of thinking of themselves as free and sovereign was quite ingrained.

The Romans believed that all authority came from the people. It could be said that similar language seen in more modern political and social revolutions directly comes from this usage. People in this sense meant the whole government. The latter, however, was essentially divided into the aristocratic Senate, whose will was executed by the consuls and praetors, and the comitia centuriāta, "committee of the centuries", whose will came to be safeguarded by the Tribunes.

One of the ways the emperor Commodus (180-192) paid for his donatives and mass entertainments was to tax the senatorial order, and on many inscriptions, the traditional order is provocatively reversed (Populus Senatusque...).

Beginning in 1184, the Commune of Rome struck coins in the name of the SENATVS P Q R. From 1414 and 1517, the Roman Senate struck coins with a shield inscribed SPQR.

During the regime of Benito Mussolini, SPQR was emblazoned on a number of public buildings and manhole covers in an attempt to promote his dictatorship as a "New Roman Empire".

Community content is available under CC-BY-SA unless otherwise noted.
Advertisement